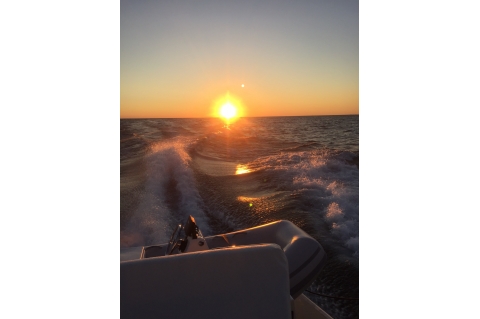 On Sunday morning Captain Eli and Mate Graham passed through Lock 23, on the Sabre 48 Salon Express, which put us into the Western part of the Erie Canal System.  From there they they swayed off to the Oswego Canal System which would ultimately put them into Lake Ontario a little bit quicker, or so they thought.  Captain Eli made the call and the folks there told him to come on over and get into line, however, they neglected to say how long it would actually be.  Once they arrived at they found out that since they are a non-commerical vessel, they were not priority so it could be anywhere from 24 hours to 72 hours before they were able to pass due to the high boat traffic.  Captain Eli made the decision to back track and head back through the remaining part of the Erie Canal so that they are at least making forward progress rather than playing the waiting game again.  Lesson learned; stay in the Erie Canal System!

Being back in the canal, they are finding this part of the journey to be a never-ending stream of locks, after locks, after locks with break of running at 10 mph.  For Captain Eli, who is used to running boats at a quick pace with long days, this is a test in his patience.  They hope to make Lock 25 by nightfall this evening.  Stay tuned for more lessons learned and updates.

You win some, You Lose Some