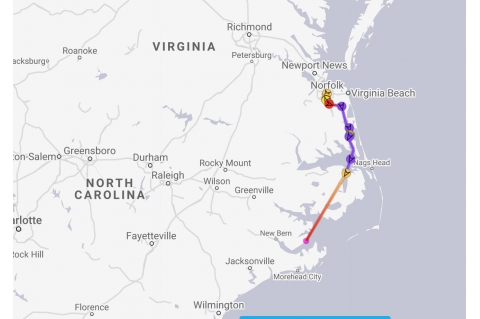 As Captain Eli and Sven departed Norfolk, the weather was not ideal for running outside and regardless, running inside is typically the preferred route in this area.  They pulled lines in Norfolk at 6:30am wanting full daylight while running in the ditch.  Their goal was to run to Beaufort with a fuel stop in Coinjock, NC.  Typically, a run on the inside from Norfolk to Coinjock would take about 4 hours.  Today, it took longer as they got stuck at Norfolk Southern Bridge #7 while 4 trains passed over.  For those who have not made this trip, it’s not uncommon to get stuck at this bridge.  If you look in the photo gallery, you’ll note that bridge #7 is actually the small railroad bridge on the otherside of the large bridge.

Once they passed bridge #7, Captain Eli and Sven proceeded through the Great Bridge Lock in Chesapeake, VA and from here they entered the Intracoastal Waterway aka the ditch.  Fun factoid: this part of the Intracoastal Waterway is the oldest continually operating man-made canal in the US which first opened in 1805.  Back to the trip; the crew gained a bit of momentum as they crossed Ablemarle Sound into North Carolina and tied up in Coinjock for fuel.  The Sabre 58 took 725 gallons of diesel and ran roughly 370 NM most of which at 26 knots.  That’s quite a range and comparable to that on the Sabre 66!  This was also the first opportunity to get water aboard as the boat has been winterized for the cold temperatures in the Northeast.

As the sun began to set, the guys didn’t quite make Beaufort, but landed at River Dunes Marina near Oriental, NC.  We cannot wait to hear where their journey tomorrow takes them.

Enjoy a few videos and photos from Day 3.