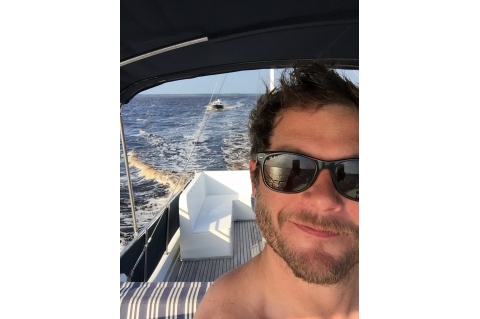 As many of you know, our in-house captain, Captain Eli, travels up and down the East Coast doing deliveries and orientations.  He has probably logged more hours than any other individual on Sabres and Back Coves.  He is well known amoung our customers and one of the most frequent questions we are asked is, “Where’s Eli?”

Today, Captain Eli is onboard a 2001 46′ Grand Banks (a recet trade in) heading from Southport, North Carolina to our office in West River, Maryland.  His first night was spent in Surf City, North Carolina and his second night was spent in Bel Haven, North Carolina where he met a couple onboard their new Back Cove 37.  After some chatting, they decided that they would run with Captain Eli today and they did for about 5 or 6 hours until they departed to the Dismal Swamp while Eli stayed outside and was heading to Norfolk, VA for the night.  Oh, the people you meet on the water!