Ship on a Ship 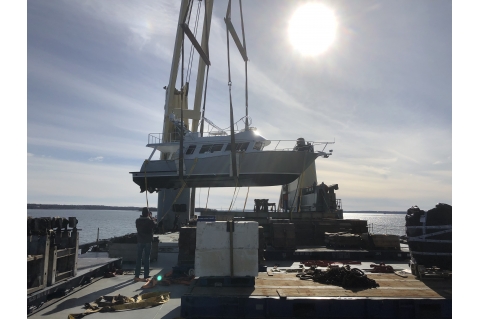 DiMillo’s Yacht Broker Peter Ouellette has sold our Coastal Craft 45 and the new owner is in Vancouver, British Columbia, and we’ve got to get the boat there.  Peter enlisted the help of DiMillo’s very own Captain Eli to get a “ship on a ship!”

It’s the middle of February but thankfully between storms.  Captain Eli’s day started off in Portland, Maine, where it was 8 degrees.  Sea conditions were a 2 ft following sea, not bad for the middle of winter.  It took Captain Eli 8 hours to run the Coastal Craft 45 to Safe Harbor New England Boat Works in Portsmouth, RI, where she lived for the next four days before being loaded on a ship bound for Victoria, British Columbia.

A few days later, during the middle of an ice storm, Captain Eli received the call from the shipping company that they were going to load “the ship on a ship” the following day at 3pm.  Captain Eli and his mate Sean left Maine the next morning to pick up the Coastal Craft 45 in Portsmouth and run her out to the cargo Ship GRIETJE that was anchored in the river.

Captain Eli and Sean threw lines and headed into Providence River.  They did a few circles around GRIETJE until they were queued to be lifted onto the boat.   At this point they tied up alongside of GRIETJE where 6 men came aboard the Coastal Craft to assist with placing the lifting straps around the boat as well as yellow guidelines on the cleats..  Along with the six men, there were two divers assisting with the straps assuring they were place appropriately.  Please note that where GRIETJE was anchored in the Providence River, there was a 3-knot current running.  Captain Eli was already impressed with the loading crew!   Once the straps were secured, the Coastal Craft was lifted to GRIETJE’s railing and all parties aboard the Coastal Craft had to climb the rope ladder to board the cargo ship.  Captain Eli noted that an interesting part of this process is the barge/counterweight that is put out on the opposite side of the ship while boats are being hoisted onto GRIETJE.  Have a look in the gallery for some great images of this process.

Since Captain Eli and his mate Sean were not taking the journey to Victoria, the departed the cargo ship using the “less sketchy gangway stairs” to hop on the launch and head back to land.

It’s been roughly a month since the Coastal Craft was loaded onto GRIETJE in Portsmouth Rhode Island.  There have been stops in Florida and Mexico thought out the month.  We’ve received word that GRIETJE is due to arrive in Victoria tomorrow!  Congratulations to the new owner and what a journey this Coastal Craft 45 has already been on!

Ship on a Ship