Sabre 66 #5 Emerges from the Sabre Facility 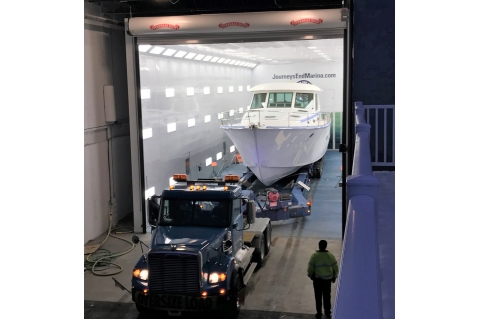 My alarm went off at 3:30 yesterday morning in anticipation of a 4:00 departure from Freeport, Maine.  My 8 year old son, Crosby, and I packed into the car and headed “downeast” to Rockland for the big move.  It was actually pretty warm at 35 degrees, relatively speaking.

We arrived at the Sabre facility a bit after 5:00 to an empty shop.  We are used to visiting the shop with the craftsmen and craftswomen hustling about and the various machines making a bunch of noise, but this was the extreme opposite.  Regardless of the stillness, front and center was hull #5 of the Sabre 66, proudly sitting on the trailer and ready for transport.  Doug Smith, the Project Manager for the 66 Dirigo, met us as we stood admiring the sheer beauty and size of this boat.    If you ever have the pleasure of meeting and working with Doug, you will find him to be incredibly intune with the 66 build as well as calm and helpful beyond belief.  This goes for the entire Sabre team building the 66.  Each visit is welcomed with smiles and coupled with an eagerness to share their personal contributions to the build.  Each one extrodinary in their own way.

Outside, the logistical team of police, utility vehicles and escort vehicles are converging in the parking lot and preparing for the journey down to the waterfront.  Kenny and Eugene from Journey’s End check and then double check the trailer before the door opens and she rolls out.  Below is a video of the first reveal.

The team is now ready to roll.  The police lights illuminate the early morning sky and the buckets are raised from the utility trucks elevating the wires at the entrance to the Dirigo parking lot.  Kenny from Journey’s End (side note: he has been with Journey’s End for 31 years) gracefully exits the Sabre parking lot and turns onto the main road in the industrial park.  As we move through the industrial park toward the elementary school, the police and utility trucks dance in and around each other as if they were performing a quick step on the dance floor.  By the time the 66 arrives at Journey’s End, it will have passed under four sets of street lights in it’s roughly two mile journey.  The video below shows the boat as it heads into downtown Rockland.  Take note of the utility workers holding the lights along with the many police offices controlling traffic.  You’ll also notice a very cute 8 year old boy waving with an unwavering excited energy; he’s mine!

We’ve now made our way to the waterfront and have almost reached our next stop; the paint booth at Journey’s End Marina.  While it is a balmy 35 degrees, the wind is tunneling right through the buildings reminding all of us that it is the middle of winter in Maine!  None the less, the show must go on and in she goes.  What color she’ll be…well nobody knows.  Except maybe me, and some folks at Sabre, the new owners, well you get the idea.  You’ll just have to wait until we open those doors again for her launch.  Please enjoy the last video of her moving into the paint booth.  Stay tuned for her exit…