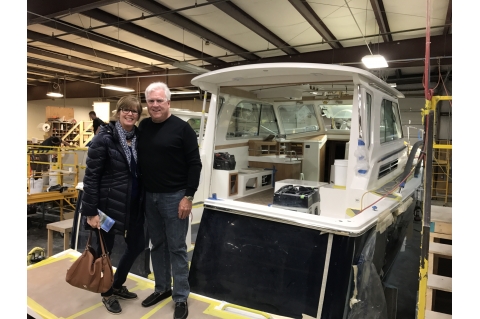 A few weeks ago, I had the pleasure of joining Rick and Karen on a trip to the Back Cove Yachts factory in Rockland, Maine.  Rick recently purchased Back Cove 37 #140 which was in the final stages of production.  I highly recommend a visit to Back Cove if you are having a one built, own a Back Cove  or are just part of the Back Cove fan club.  A side note; at the Rockland facility, they also build the Sabre 66 Dirigo as well as the large fiberglass components for the Sabre 48’s and 54’s.

National Sales Manager, Lindsey Braun, provided a warm welcome followed by an incredibly informative tour of Back Cove’s processes and production lines.  The tour begins with the initial stages of productions in fiberglass.  The fiberglass department’s responsiblities include providing all of the fiberglass components from the hull to the deck in addition to all of the small components on each boat including the helm pod, aft seats, engine hatches, etc.  As you move forward out of the fiberglass department, you are in the middle of deck department where the decks are outfitted with hardware, hardtop, windows, etc.  A few steps from the decks have you up on the staging looking down into the various hull models all lined up.  On our visit the models being built where the Back Cove 32, Back Cove 37 and Back Cove 41.  As we headed up onto the staging of the Back Cove 37 line, we were able to see all of the electrical and mechanical components being installed; engine, generator, water pumps, hot water heater, A/C systems, bilge pumps, lights, fuel tank, water tank, stern thruster and a bow thruster were just a few of the systems we had the opportunity to see installed in the boat.  What is truly great about seeing the boat with the deck off is that you have a real grasp of where all of the systems are located once the deck goes on.  During this stage, the bulkheads along with other wood components are added giving the boat functionality, but with a rich look.  About midway on the line, the boat arrives at the point where the deck is installed.  A fasinating process to watch if you ever have the opportunity.  The final strech of each boat’s factory life is at the end of the line; completion.

Rick and Karen were so excited to approach completion because their new Back Cove 37 was receiving the final touches before shipping out to us last week.  One chapter has closed for Plane to Sea, and the next one begins; the DiMillo’s Commissioning Process and Electronics installation.