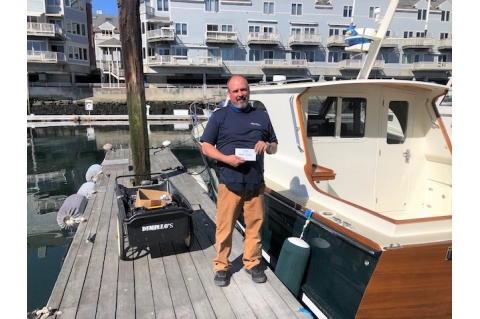 Ron Blanchette was nominated by one of our brokers who submitted the following note about Ron’s perseverance and dedication:

Ron arrived to the boat after a full day at DiMillo’s to install and rigg a swim platform, which was already overdue because of supply chain delays.  The job included installing teak, rub rails and the stainless hollow back.  All of these required drilling out the holes and then tapping holes for bolts to secure the platform to the mounts.

After working a 12+ hour day, Ron was wiped physically, but not mentally! This particular task was providing a series of setbacks, including taps breaking in place and needing to send out for more taps, Ron pushed on. He unbolted the platform with teak, lifted, blocked and removed the broken taps with vice grips, and installed the bolts that he could.  With no other taps available he went to the store, before heading home, to get new ones.

The next morning Ron finished tapping out the remaining 11 holes and had the platform, cleats and swim ladder installed before 7am.  This enabled a launch at 8am and allowed the rest of the DiMillo’s team to proceed with the remaining work order items.

Ron stepped up under immense pressure and setbacks to ensure that the platform was installed to the highest quality.  His focused clarity and plan of action, especially when things went wrong, were the reason this boat launched on schedule and we will be able to meet the client’s delivery date.

Congratulations and thank you Ron!