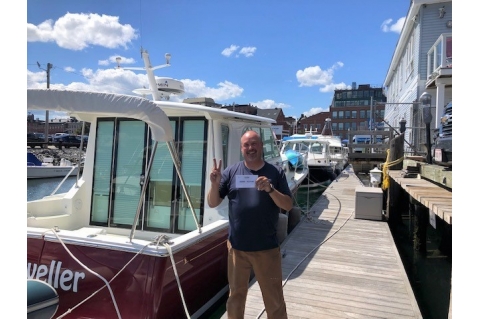 Ron Blanchette, a Maine Technician here in Maine, was performing his first professional two-day orientation for clients aboard their new Back Cove 37, as Captain Eli was on a voyage of his own. Ron was the next obvious choice considering his experience and valid captain’s license.

Towards the end of the second day of orientation, Ron heard a distress call come over the VHF radio.  Lat/Long were read over the radio, along with the words “taking on water” and a description of the vessel.  As the distressed boaters mentioned the closest landmark, Ron looked in that direction as he recognized the rock, and saw a 28’ fiberglass flybridge power boat in the distance that met the description of the vessel.  Knowing he was the closest vessel able to provide aid, Ron and the clients took off toward the sinking boat.

As they neared the sinking boat, Ron was able to jump aboard and get a quick explanation from the owners that water was filling up the engine compartment. Without hesitation, Ron got into the murky water filled engine room to see If there was something he could do.  After a bit of searching, he realized the bilge pump was not working.  Searching for the breach he found the reinforcing steel of the engine blower hose wrapped around the shaft seal, slicing the seal, allowing the water to enter the boat near where the shaft exits the boat.

Thinking quickly Ron asked for a couple of trash bags and was able to craft a homemade shaft seal by tying them around the shaft log and shaft seal to mitigate the water intrusion.

By this time SeaTow had arrived and was able to throw a large volume water pump aboard to get the water out of the boat.  The two people aboard the sinking boat were saved, and so was the sinking boat!

Just another day here on Casco Bay for the Maine Service Department.